A New Orleans Jazz Funeral is a Celebration of life and death in honoring those who have earned the right as Musicians, Culture Bearers, Members of a Benevolent Society or Social Aid & Pleasure Club.  A Traditional Jazz Funeral is made up of two parts: The Wake and The Service.

The wake is the viewing of remains in a more social environment of family, friends and neighbors.

First, the Band which is hired would meet up at the church or the funeral home were the services are to be held.  Then after the services there would be a procession through the neighborhood to the cemetery.  The band provides musical accomplishments like I’ll Fly Away, Just A Closer Walk with Jesus, etc. The tone is solemn.

Before reaching the cemetery we have a ceremony called “Cut The Body Loose”. The band, the family and friends stand on the side of the street as the hearse passes through.  After the services are over, we walk a few blocks away from the cemetery. 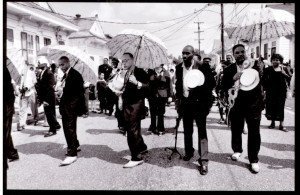 Leading the Funeral Procession is a Grand Marshall who might be a band member or part of a Social Aid & Pleasure club or a Benevolent Club. He is responsible for how the funeral procession goes through the community. He calls the shots on the music and how the pace goes.

The Grand Marshall regulates the emotion of the event and he must have the dignity and respect of his peers. Along the way, people from the neighborhood join in the parade, causing it to grow in size and intensity. People in the front are known as first liners and they are naturally followed by the second liners.

The First Liners are the Benevolent Society and the Social Aid & Pleasure Club. People from everywhere join in to express life emotions and celebrate the life of the deceased. They are followed by the hired band and the family and friends who come out to support and join in on the festivities, also known as the second-liners.

The Second –Liners are those people who join in participation of the Jazz Funeral Procession.

There is reciprocity between the second-line and the brass band members. This is a participatory event and culture. This is unique to New Orleans for we are a pedestrian city.

A Jazz Musician who has earned the right to have a Jazz Funeral is given one for their contribution to their craft. Some of the other people who receive this celebration are Civic Leaders, Mardi Gras Indians, artists and those who can afford one.

Jazz funerals have been around since the Twentieth Century and were called Brass Band funerals, but later changed their name to a Jazz funeral in the late 1950’s and early 1960’s. Though funerals with music exist only exclusively in New Orleans today, in the Ninetieth century they were held throughout the United States. Originally they were tied in with groups called benevolent societies which were established to help former slaves in America. They provided benefits such as medical services, annuity for widows and educational funds for orphans. The benevolent society was a means of self help for the African-Americans after the Civil War. Social services were denied to African Americans, so benevolent societies offered Burial policies for $0.25 a week. If the family wanted a band, they gave them a band. If the widow wanted the money they gave her the money.

The Repast is a celebration and libation of family, friends, guests and others over food and drinks.

This is only a snap shot of the history of Jazz funerals.